In HELL, Emio Greco and Pieter C. Scholten delve deeper into the layers of dance, they explore the components of different directions in dance and look at how they are read and decoded. It is a search for ways to extend the boundaries of our physical identity, ways to unleash the unpredictable body.

In the creative process existing connotations of and associations with the notion of hell are broken down and deconstructed in order to be able to rebuild a new meaning. Emio Greco and Pieter C. Scholten find their inspiration in both the visual arts, the performing arts and literature, more specifically in Dante’s Inferno and the allegro con brio of Beethoven’s Fifth.

"(…) Tragedy and grotesque vulnerability, but also playfulness inflame the space that is used with unusual freedom and fantasy, and the nudity, kissed by milky lights, of the eight dancers (with super personalities) is noble and even self-celebrating when the dance […] encounters the more powerful Beethoven.” – Marinella Guatterini (Il Sole 24 ore, October 12, 2008)

"This is the great circus of dance, obsessed with perfection, virtuosity and its joy beyond pain. It is paved with reminiscences of the classical vocabulary, the fount of Emio Greco’s formation which he knows how to twist the way one flexes a metal nameplate. HELL adds splendour to the works of the duo." – Rosita Boisseau (Le Monde, December 14, 2006) 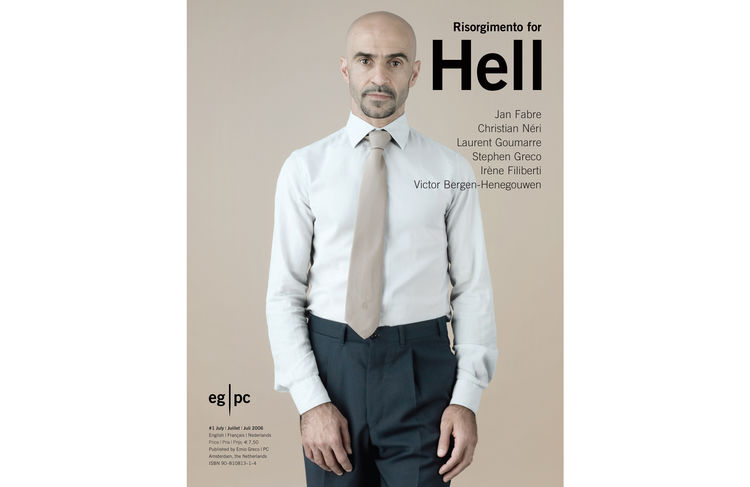 For the magazine HELL, the creators, writers and image editors have applied themselves to making a strong connection between dance and the visual arts. With Dante's Inferno as a starting point, the magazine shows specifically assigned work as well as existing work by artists from multiple disciplines. HELL, the magazine, has the appearance of a visual essay and aims at creating an aesthetic visual and textual world; a completely personal hell, which can exist alongside that of the dancers.

Published by ICK in close cooperation with art director and artist, Isabelle Vigier.
Available in Dutch, English and French. ISBN 90-810813-1-4
Price: € 7,50
To order this publication, send an e-mail to info@ickamsterdam.nl