To be or not to be: Hamlet as a dance performance, trembling and sensual bodies, four generations of dancers on one stage and an audience that decides on the choreography. Once again, ICK's three-day dance festival sharpens all the senses. The mobility of certainties in which we live today invites us to think, move, look and feel differently. From intuition and vulnerability, from a search for new connections, from our bodies. To be is to dance.

Theatre de Meervaart, festival heart of the ICK-Fest, opens its doors on Friday night with a meeting between four generations of dancers and two generations of choreographers. The world premiere of Known & To Know consists of a double bill by the young choreographer Andreas Hannes combined with a piece of repertoire by Emio Greco | Pieter C. Scholten. Hannes creates Reverberated Emissions with the dancers of the ICK ensemble. Bodies hop, bend, transform and collide in this musical performance. Greco and Scholten asked several generations of dancers to breathe new life into Conjunto di Nero from 2001. Only at the ICK-Fest it will be danced by part of the original cast: Emio Greco, Barbara Meneses and Dereck Cayla, supplemented by current ensemble dancer Denis Bruno.

ICK-Fest shows both ICK's own work and that of promising makers from abroad. On Saturday Known & To Know can be combined with Hamlet by the Italian artists' collective Dewey Dell. Choreographer Teodora Castelluci uses the theatre icon Hamlet as a starting point for a highly visual dance performance. Three dancers transform Hamlet's mental state - to be or not to be - into a physical quest for possession, when your body belongs to someone else.

P A N O R A M A, a video installation by Nicola Galli in collaboration with visual artist Davide de Lillis will be on view all weekend, as will several dance films that tie in with the ICK-Fest programme curated by Cinedans. There will also be workshops, pop-up performances, and who knows, even an afterparty. Because of the ever-changing rules, keep an eye on our website for updates on the extensive fringe programme. 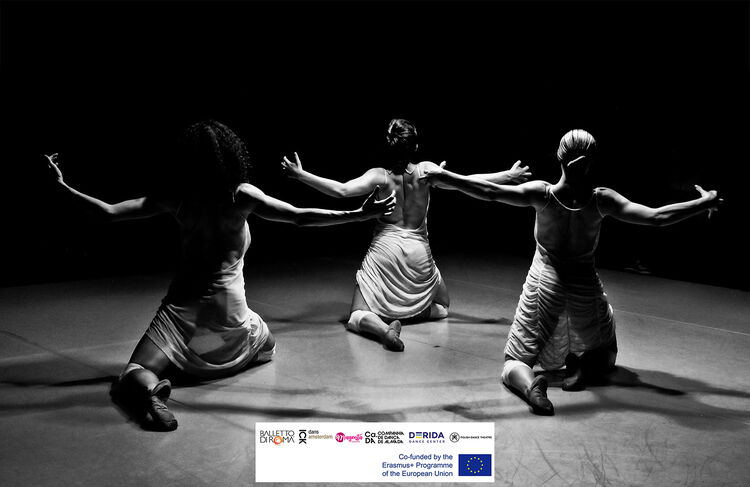 ICK Dans Amsterdam cordially invites you to participate in their professionals program on 27th of November, during the 3-day dance festival ICK-Fest at Theater de Meervaart. This program is centered around the presentation of the European project Up2Dance and will start with a Double Skin/ Double Mind workshop. In the two-year project Up2Dance (2019 - 2021) several European partners are looking at the development of new European curricula for dance professionals. ICK collaborates with Balletto di Roma (Italy), Derida Dance Center (Bulgaria), Companhia de Dança de Almada (Portugal), Polish Dance Theater (Poland) and Magenta Consultoria (Spain).

PRACTICAL
The program will take place at Theater de Meervaart: Meer en Vaart 300, Amsterdam The workshop and presentation are free, please RSVP at info@ickamsterdam.nl Tickets for the performances are available via the website of Meervaart. During this event, the results of this project will be presented among which a ‘Manual for Good Practices’ and recommendations for the future. Suzan Tunca will present some highlights of the research and enter into dialogue with Italian dancer and choreographer Nicola Galli about the experiences in the professional field of Italy and The Netherlands. After the presentation we will open the conversation around the past, present and future of the dance profession in the Netherlands and Europe.